A combination of geopolitical events has dampened earlier gains in gold futures. The precious yellow metal traded to a high of $1501 per ounce before softening on the close. As of 4:10 PM EDT gold futures are currently trading up $1.50 on the day and fixed at $1495.60. 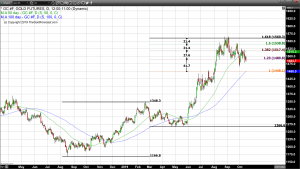 Today Turkey agreed to stop its military action in Syria for the next five days. This will allow the opposing Kurdish forces to withdraw to a “safe zone”,  according to Reuters.

“The truce was announced by U.S. Vice President Mike Pence after talks in Ankara with Turkey’s President Tayyip Erdogan, and was swiftly hailed by President Donald Trump, who said it would save “millions of lives”. If implemented it would achieve all the main objectives Turkey announced when it launched the assault eight days ago: control of a strip of Syria more than 30 km (20 miles) deep, with the Kurdish YPG militia, formerly close U.S. allies, obliged to pull out.”

Go Back To All Articles Here: https://goldnotes.com/category/latest/